but all I see is curtain --

not the ghost behind it.

So I don't believe it.

And he goes back

Posted by Karlo Sevilla at 10:57 PM No comments:

Last August 8, I started a new blog which I named, "The Gods Envy Us." (Yup, after the line from the Troy movie.)

Last August 12, I bought a book of poetry (rather casually and hurriedly, from a book sale) entitled, The Gods We Worship Live Next Door, by Bino A. Realuyo.

Earlier this afternoon, I added the following phrase to my secret prose poem:

Just now, this late evening, I read the following from her* poem:


A few miles away, the residents of a dumpsite are dead, their bodies buried in an avalanche of trash.

*Last night, I visited, just for the second time, a bookstore which -- according to the "attendant" there yesternight -- the poetess co-owns. (To my sweet surprise!)

And, barely an hour ago, I watched Rated K and found the place where Ryan Rems Sarita was interviewed as quite familiar. ;-)

When carpenters work, they don't argue if God or which god prefers a hammer or pliers to hammer
that nail; they just use a hammer to hammer that nail.

When road construction workers work, they don't debate whether God or what god recommends concrete or hay for the highway; they just pour the concrete to pave the highway.

When agricultural workers work, they don't fight over what god or whose god commands the use of sickle or disposable razor blade to harvest rice; they just cut with the sickle to harvest rice.

We eat, travel, and live thanks to the workers who work and suffer under the few ungodly gods among us; providing us food, roads, and shelter that we may all eat, travel, work, and live.

In solidarity with USA workers, on their nation's Labor Day next month, September 7, 2015. 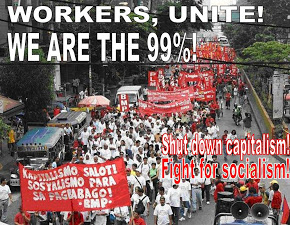 Posted by Karlo Sevilla at 9:03 PM No comments: