“They have trained for five months on grappling and other wrestling techniques,” Heydarabadi said in an interview during the well-attended open workout conducted by ONE Fighting Championship (ONE FC) at the Resorts World Manila for some of the MMA fighters.

Ten thrilling matches will be presented during ONE FC: Moment of Truth at the Mall of Asia (MOA) Arena on Dec. 6 starting at 7 p.m., with the Filipino MMA strikers figuring in five challenging bouts.

Iranian wrestler Heydarabadi was hired by Team Lakay after the Filipino fighters’ total shutout in last May’s ONE FC event at the MOA Arena, which many blamed for their lack of wrestling skills.

He said the Team Lakay fighters have improved a lot on their wrestling skills which would neatly complement their wushu background.

“Wushu wrestling is different. In our training, I taught them how to take down and defense takedown and other techniques,” he added.

Heydarabadi said it was a short training period but the fighters have developed a lot. “I believe they are better the last time.”

Among the Team Lakay fighters he trained were Honorio “The Rock” Banario, who will figure in the main event as he tries to regain the ONE FC Featherweight championship from tormentor Japanese Koji Oishi; Kevin Belingon, who will face undefeated Spaniard David Aranda Santacana; and Eduard Folayang, who will battle seasoned Dutch-Indonesian striker Vincent Latoel.

“I will get back my belt. I have trained double time. I have been waiting for this opportunity. Our wrestling coach has taught us new techniques,” Banario himself said in an interview after the open workout.

He also stressed that Filipino boxing icon Manny Pacquiao’s victory last Sunday against Mexican-American Brandon Rios has inspired him and the other Team Lakay fighters.

“We are motivated by Pacquiao’s victory. I know his triumph will pull us up and enable us to score wins against our opponents,” said.

Belingon said, “Our training and conditioning is good this time. We learn many wrestling techniques,” he said.

He said he is not in any way intimidated by the perfect record of his opponent. “I don’t care about his record. I will just focus on my game plan.”

Posted by Karlo Sevilla at 4:44 PM No comments:

The following is the full report, with photos, submitted by Springstowne Wildcats coach Jason Guiducci: 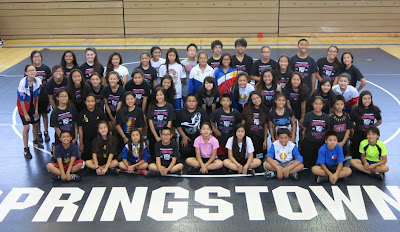 The 3rd Annual Philippines Wrestling Showcase in Vallejo, CA, USA saw some fantastic grappling occur on September 26, 2013. A bit of WAP history even came to light linking a current wrestler to an amazing figure of the WAP’s past.
The middle school folkstyle division was a highly spirited contest, thanks in part to an all-time high number of participants with 56. The home team host Springstowne Wildcat Wrestling Academy brought 54 competitors to the event, which saw Lady Wildcats Joanne Cabanlit and Jasmine Capiral become the event’s 1st 3-year participants. The pair wrestled at the Inaugural event in 2011 and each subsequent one since. Nearby Benicia Middle School also brought two highly skilled wrestlers in Tara and Basil Othman, who went a combined 5-1 on the day. 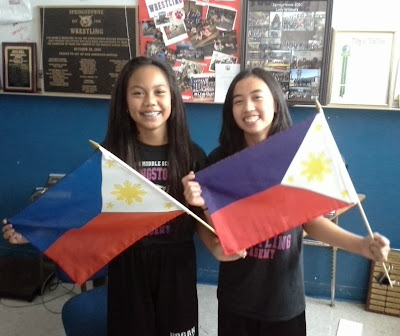 Jasmine Capiral and Joanne Cabanlit Became The 1st 3-Year Middle School Participants
The High School/Open saw a dip in the number of participants with only 11 competitors registered for the event, but the competition was fierce throughout including an amazing storyline as the exclamation point to a terrific evening

Co-Director Jeremiah Esguerra and newly coined “Mr. Showcase” extended his All-Time Record Showcase win total to 5 in 3 years, by scoring both Freestyle and Greco wins vs the physically imposing Damien Reyes. On the girl’s side, the crowd was treated to a battle of the titans between Ricki Liang and Shelly Avelino, two of the all-time greats from the Springstowne program. The two were deadlocked 4-4 at the end of the 1st period, before Liang utilized her experience as a two-time member of USA Wrestling’s Team California to pull out the win.
The most intriguing story of the night was Brandon Basa, who traveled close to 200 miles from Carson City, Nevada to compete in the HS/Open. His grandfather was Jose Ma Basa III, who was appointed by President Marcos to train and prepare Philippine wrestlers to compete at an event in Edmonton, Canada in the 1970’s. The family even had a vintage WAP warm up top on hand. (See Pics Below) 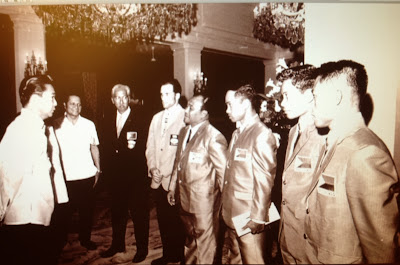 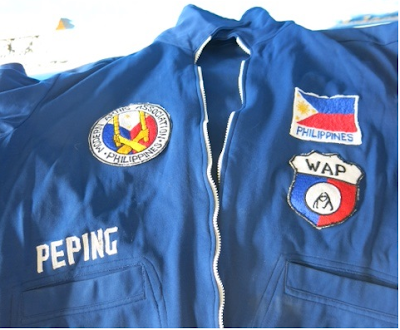 A Vintage WAP Warmup Jacket Courtesy Of The Basa Family

Brandon lived true to the family’s wrestling heritage as he scored 2 freestyle wins and one Greco win on the night. 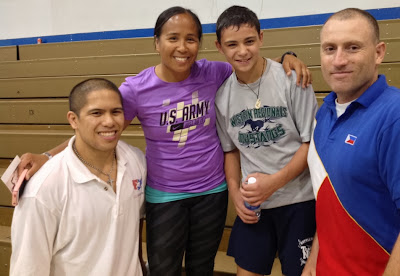 Brandon Basa With Event Directors Jeremiah Esguerra, Julie Gonzalez and Jason A. Guiducci
Following up last year’s success of the singlet donation program, this year’s Showcase will be donating 30 singlets to be split amongst three clubs identified by WAP President Albert Balde. The recipients will be Baguio, Ifugao and Antique. Pictured below are a number of Springstowne Wildcats holding the singlets. 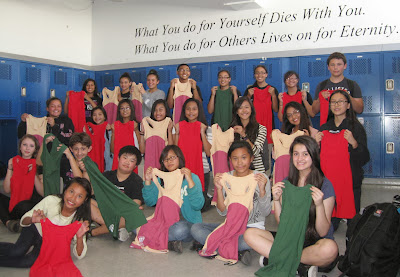 For More Information About The Philippines Wrestling Showcase Host Organization ...
Visit Them Here On The Web! 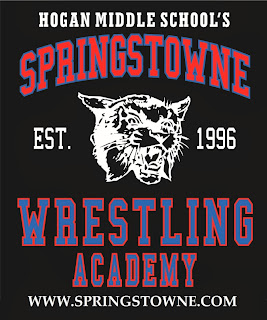 Posted by Karlo Sevilla at 5:40 AM No comments: