Bultong is what the Ifugaos call their ancient and timeless traditional wrestling form. It is often played during town and provincial fiestas and is always the most popular event in these occasions. Bultong falls under the international classification of "belt wrestling" forms.*

Like most traditional wrestling forms all over the world, no one can tell exactly how ancient and when exactly the Ifugao ancestors started engaging in bultong. Arguably it is as old, or even older, than the Banaue Rice Terraces. 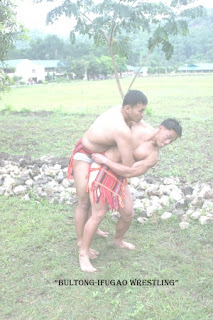 How it is played
a t-shirt and pants underneath the loin cloth. 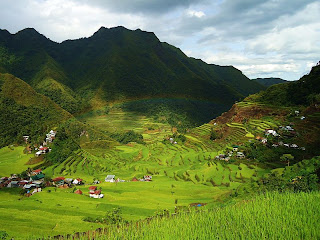 Role of bultong in Ifugao society
Aside from the widely recognized positive roles that sports play in society, e.g. fostering camaraderie, perpetuation of social values, fostering individual and group confidence, etc., bultong is unique in that it was also used in the dispensation of social justice - and was therefore also instrumental in peace–keeping - among the Ifugaos.
Until the early part of the 20th century, bultong was used in the settlement of land disputes, especially in the rice terraces which were subjected to erosion and thus obfuscating prior accepted boundaries. When there were conflicts regarding ownership of land, particularly on the demarcation of the boundary of two adjacent lots, rice paddies or terraces between two different land owners, the contending parties resorted to finally settling their disagreement by the way of bultong. The contending parties may contest between themselves or field their chosen representatives, to approximately even up differences in weight and reputed strength, for the important match.
Bultong also played a religious role, as the wrestling match involved an elaborate and religious ceremony participated in by the relatives and family priests of the contesting parties. Ancestral spirits were invoked to ensure that the one who had the rightful claim would win the match. Indeed, both conflicting parties along with their kin believed that the eventual winner was really the just owner of the piece of land he claimed all along, as duly determined and favored by the spirits. This was the main reason why the protagonists and those in attendance were generally in a friendly mood, assured of a just outcome regardless of the winner.
With the selected person, who was usually a mutual relative of both parties, acting out as a kind of referee, the two disputing male land owners or their proxies engaged in the wrestling match. He who managed to throw his opponent down on the spot that he claimed was the rightful boundary of his lot - the farther the better for him - won the right to that spot as the demarcation of his land's boundary.
Afterward, the two parties and the referee cordially hung out for a betel chewing session.

*This is an updated article of the entry that I wrote on the same subject, Bultong, for WikiPilipinas.org (January 21, 2011).

Posted by Karlo Sevilla at 4:27 PM No comments: