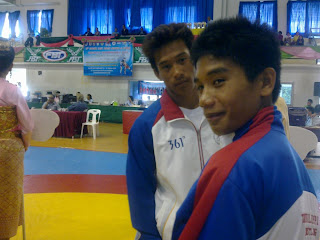 (Our two bronze medalists in last year's SEA Junior and Cadet Wrestling Championship: Joshua Gayuchan of Ifugao in the foreground, extreme right, and Alvin Lobreguito of Quezon City, during the opening ceremony's parade inside the Institute of Physical Education Hall, Suphanburi, Thailand.)

We in the Wrestling Association of the Philippines (WAP) are sending off 17 young Filipino wrestlers—our  national sports association's biggest-ever international athletic delegation since 1997*—who will fly to Suphanburi, Thailand tonight to compete in the 6th Southeast Asian Junior and Cadet Wrestling Championship from May 3 – 5, 2013.

From a token delegation of only three wrestlers in last year’s edition of the championship, this time WAP fields a much bigger Philippine Youth Wrestling Team with the hope of proportionately increasing our chances of winning more medals than the two-bronze medal output in 2012. Last year’s bronze medals were bagged by Joshua Gayuchan of Ifugao and Alvin Lobreguito of Quezon City.

Gayuchan, who still belongs to the cadet (16-17 years old) division, will lead the Philippine Youth Wrestling Team with the goal of winning gold this time around. Lobreguito, on the other hand, has already graduated to the senior-age division at 21, and is concentrating on the 2013 Southeast Asian Games instead, which will be hosted by Myanmar this December.

Still, for the record, we find it a safe bet that they’ll take home a minimum of three gold medals.

In our 2013 Philippine NationalYouth Wrestling Championship last April 12-14, WAP qualified a total of 47 athletes for the Thailand event (which allows two athletes per weight class per country) but only 17 received funding. Six are funded by the Philippine Sports Commission (PSC), eight are supported by WAP, two athletes from New Era University (NEU) are sponsored by the Iglesia Ni Cristo and one from Mandaluyong City has all expenses paid by his family.

WAP is still raising support for the other qualifiers who can’t make it to Thailand, to be able to see action in the much tougher Asian Junior Championship in Phuket, Thailand from June 13-16 and to the Asian Cadet Championship in Ulaanbaatar, Mongolia from July 25-28.

Those who want to help our participation in the abovementioned Asian Junior and Cadet Championships can deposit to our following Philippine National Bank (PNB) Harrison Plaza Branch accounts: 1) Account name: Wrestling Association of the Philippines, 2) Peso Account No. 411912700014 and/or 3) Dollar Account No. 411912700030. Any amount will be deeply appreciated—and needed. Those who wish so will be duly acknowledged. Thank you for your support.

*In 1997, the WAP fielded a total of 23 athletes for that year's Southeast Asian Senior Wrestling Championship in Vietnam.

Posted by Karlo Sevilla at 3:53 PM No comments: 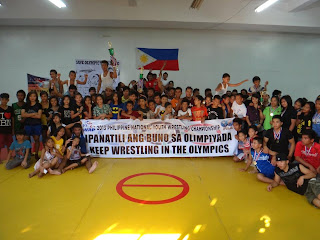 A total of 160 young Filipino wrestlers, aged 10 to 20 years old and representing 20 clubs nationwide, competed in the 2013 National Youth Wrestling Championship of the Wrestling Association of the Philippines (WAP) held from April 12 – 13 at the National Wrestling Gym, Rizal Memorial Sports Complex in Malate, Manila.

With the competition's theme, “Ipanatili ang Buno sa Olimpiyada (Keep Wrestling in the Olympics)," the top three teams that emerged after the smoke cleared are Quezon City, as team champion, and followed by Taytay in 2nd place and Ifugao State University in 3rd place.

The Philippine Sports Commission (PSC), according to Wrestling Association of the Philippines (WAP) secretary general Karlo Sevilla, has assured financial assistance to only 14* of those who made it to the SEA championships. Sevilla added though that WAP is trying its best to secure funding to 33 others, most of them coming from provincial clubs, so they could earn the trip and do honors for the country. [...]

“Those who made it to the SEA championships are products of WAP’s efforts to create an immensely larger and deeper pool of young wrestlers nationwide, and casting wider nets with our competitions to catch potential elite wrestlers for the Philippine Team,” Sevilla said.

(*Clarification: Of the 14, six athletes will be funded by the PSC, while the other eight will be supported by WAP.)

Here are the complete results of the national competition, followed by the list of qualifiers to the 2013 Southeast Asian Juniors and Cadets Wrestling Championship to be hosted by Thailand in Suphanburi Province from May 1 – 5.

( Poster design by Detremier Villones of Gorilla Printing, illustration of Milo carrying the cow from the website Blackboxstrength.com)

*The 14 athletes whose names are marked with asterisks are already assured of governmental and private support to join the SEA Juniors and Cadets Wrestling Championship. The team managers, along with the WAP board, are still raising funds to support the participation of the 33 others. WAP welcomes sponsorship/financial assistance to help the rest of our qualifiers take part in the annual regional competition for young Southeast Asian wrestlers.

Posted by Karlo Sevilla at 10:53 PM No comments: