We are what or who we are

Sometimes, I wonder
if becoming human
is a transcendence
or debasement,

a blooming
or a
withering.

Specks
of
dusts
revolving
as
planets --

Posted by Karlo Sevilla at 3:42 PM No comments:

So into you, I
itch with the venereal
diseases with love.
Posted by Karlo Sevilla at 11:49 PM No comments:

Braving the long dry season, on the road
24/7:  barefoot along the burning avenues,
or behind the wheel of the old,
trusted melting steel,

Of paralysis as its mass of hostages
snake through its mostly unremarkable
streets of remarkable urban decay,
with few elitist bright spots

For escapists who can afford the luxury.
It's been raining and flooding, but
Pedro Obrero swears the dry season
has partially eclipsed the wet,

Eating into, chipping into, the latter's
months, and the torrential episodes
of rain were nothing more than
aberrations or distractions

Climate. (Technically, we have no
summer here. And the enervating
and murderous spiel of sweat, dust
and smoke wrought and

Brought forth by the sun's incantations,
whipping on the laborer's hardened
back, unforgiving and unremitting,
has been invading

And suffocating on its extended run.
Weather manipulation, perhaps,
by the lords in air-conditioned
mansions amid hectares

Of haciendas and gated communities
of exclusive subdivisions, where fountains
of cold, potable water in everyone's
private, sprawling gardens

Spout and overflow 24/7. The one
percenters get drunk on both purified water
and the shed blood of the rest; both
of which they enjoy

An endless supply of. Days, weeks,
and months in the city desert, and finally,
a glass of cold water for Pedro,
a small pond in an oasis.

He realizes the depth and urgency
of his thirst only when he commences
his drink; quite surprised by the big,
involuntary gulps by which

He slakes his thirst. Midway, he tastes
the water turning into kvas, and after
the last gulp, the last drop,
he reads inscribed


Posted by Karlo Sevilla at 3:47 AM No comments:

During my son's recent educational field trip at Creative Thinker, Boom na Boom Compound, CCP Complex in Pasay City, this sign on the wall rubbed me the wrong way: I find it to be anti-worker. It reads (as shown), "Robots make great workers because they can work around the clock on tedious tasks without making mistakes, and they never complain!" 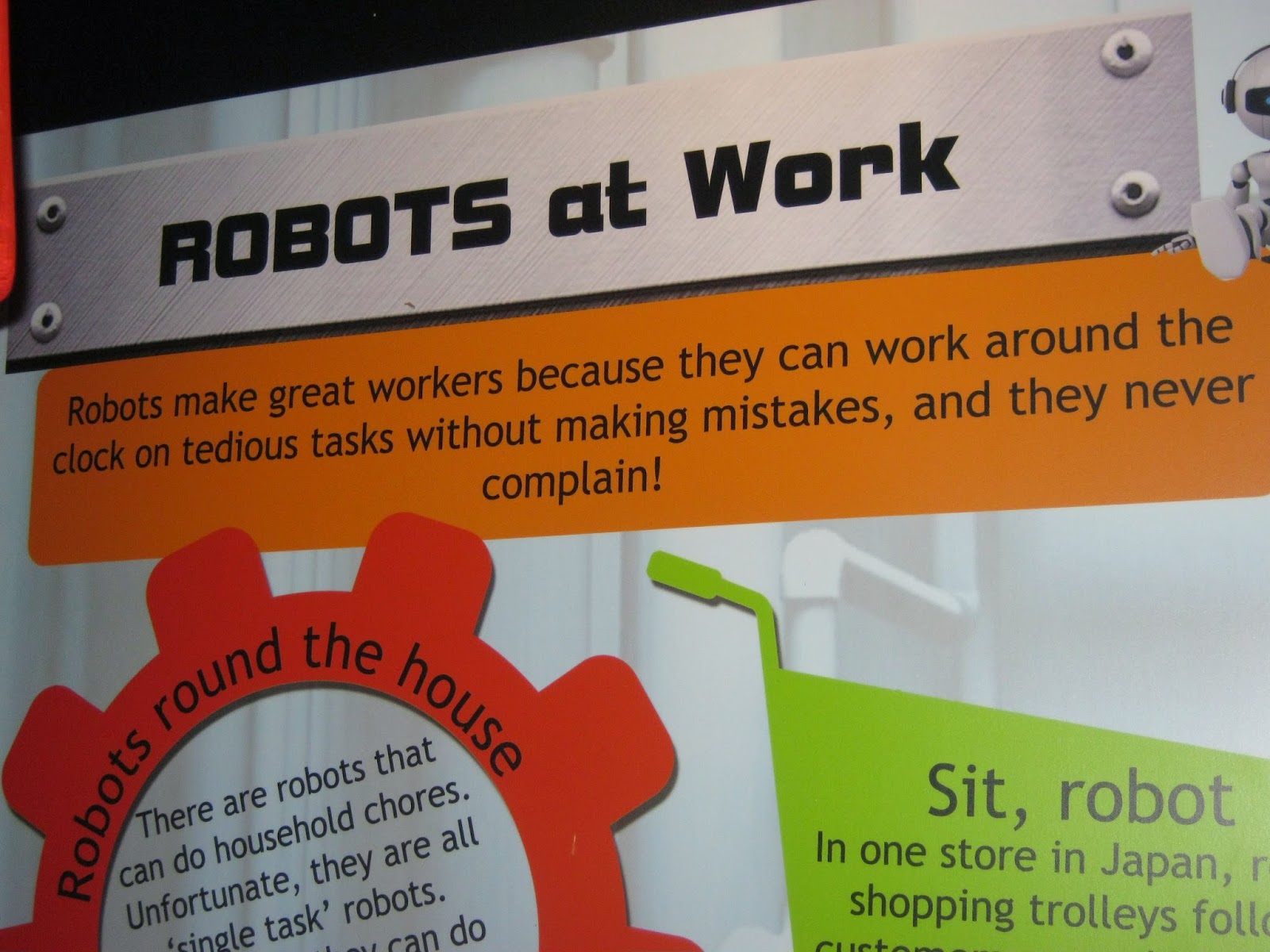 Well, robots don't get hungry; pay house rent, electric consumption, water, transportation, hospital bills, etc.; buy clothes for themselves and their families; feed their families; send their children to school; and get paid below the cost of living. In this country plagued with rampant labor rights violations, I prefer that the management of Creative Thinker be more creative and progressive, and replace and rephrase that writing on their wall. It's not something that I want my child to read and interpret as praising the advantages of robotics over "problematic" manual labor. What I will teach my children is this: "Those fascinating robots, which are also products of human intellect and labor in the first place, should benefit more of humanity including the working class -- and not just for maximizing the profits of a few capitalists!"

My laptop hangs, around every ten to fifteen minutes.
My uninformed theory (poor non-techie me) is that
it happens every time I don't do anything to it (a
crime of omission!) while it's on: when I don't
push a key nor move the cursor. I don't use a
mouse as it's an extra baggage; I function
with the touch pad at the fore of the base,
right before the keyboard. For the past
quarter-hour, I've been rubbing
its smooth center ceaselessly
with my forefinger,lightly
but vigorously,
like a clitoris.