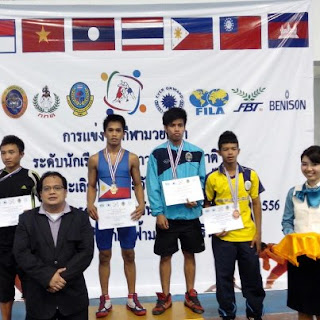 Meldion Piñon, originally from the Quezon City Wrestling Team, led the Philippine contingent by winning gold in the 50 kg. junior (ages 18-20) men’s freestyle in the 6th Southeast Asia Junior and Cadet Wrestling Championship held in Suphanburi, Thailand from May 3-5, 2013.

En route to the gold, three-time national youth champion Piñon overpowered Thai teammates Sut Ti Pong and Thunsil Ninimuk successively via superiority (ending both two-round matches with a six-point lead in every round) and stopped the favorite Le Aung Tung of powerhouse Vietnam, when the latter injured his eyelid after accidentally slamming his head against Piñon’s knee. With Tung’s eyelid sustaining a huge gash, the referee stopped the contest and awarded the win to Piñon who was leading, 3-2.

This is the first and last participation for Piñon in this annual Southeast Asian competition for cadet (ages 16-17) and junior wrestlers as he will be turning 21 next year.

We may have fallen short of our three-gold-medal target, but we are still impressed with the performance of our wrestlers considering our youth team are going home with one gold, three silver and seven bronze medals this time—a vast improvement to its two-bronze medal output (one of which was won by now-silver-medalist Gayuchan) in last year’s edition of this international competition. And, a majority, 11 of 17 members of the team, ended up as medalists. And this feat was against 80 participating wrestlers from Vietnam and 160 from the home country of Thailand.

Vietnam again stamped its dominance in SEA wrestling, but we have again proven that we can beat some of their wrestlers, taking into account also our showings in the past biennial SEA Games. We are committed to turning the tables and beating most of their wrestlers in the years to come.

Our recent medal haul in the SEA youth wrestling competition augurs well for our coming stint in this year’s SEA Games in Myanmar in December. Again, it’s the law of averages at work: the more we send, the more chances of bringing home medals.

We always want to field a complete lineup to offset the largely unexpected misfortunes in sports, specifically of favorites falling short, like what happened in this recent tournament as well in the past SEA Games. Conversely, those from whom not much are expected have shone brightest, like in the case of Piñon and that of two-time SEAG gold medalist Jason Balabal when he first joined the SEAG in 2009 (and won his first international gold medal).

We get to field more athletes this SEAG in December, and we will definitely come home with more goods. Besides, Filipino wrestlers always give their all for flag and country, as we count among our ranks in WAP the most patriotic elements in Philippine sports.

Posted by Karlo Sevilla at 7:13 AM No comments: